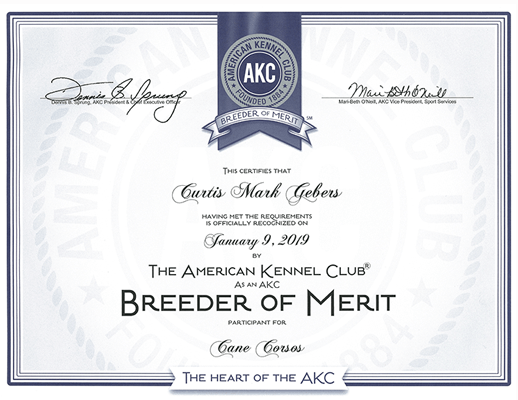 Incredible Cane Corsos don’t just happen by accident; the true champions of the breed are purposely created by breeders who know the breed well. At Red Rock Canyon Cane Corso, we know that our duty is to bring forth some of the finest examples of the breed, so that’s what we strive to do. Our Cane Corso kennel has set the gold standard in what should be expected from a reliable breeder, which is why so many people seeking one of these dogs come to us. Our dogs have a genetic lineage that ensures they are born to be beautiful, strong and healthy, and capable of stepping into an arena and making the best impressions as Champions and Grand Champions.

Not only has Red Rock Canyon produced a long list of Grand Champion Cane Corsos, but we have also had a number of dogs gain Champion titles as well. Red Rock Cane Corso kennel is widely recognized for a lot of reasons, but one of the reasons is that many of our puppies have earned champion designations at an early age. A few examples include:

When you have a professional kennel that strives to ensure every dog is healthy and a prime example of the breed, winning just ends up in the blood of every new puppy that is born. We pride ourselves on ensuring we breed and raise champions, whether their success is measured by their loyalty and service to owners or by winning highly sought after champion and grand champion titles and designations. Take a look at our Champions below and reach out to us to find out more about our puppies, our kennel, or our prize-winning Cane Corsos.