Meet Apollo: One of the Finest Cane Corso Studs

Apollo was born in August 2005. He was the son of Red Rock Canyon’s beloved Bluesteel’s Thor and the beautiful Athena. Apollo was also the grandson of Timber and Bayos Dei Silvanbull, which was a 2002 Young World Champion. This Cane Corso puppy quickly grew to become one of the most esteemed and recognized Cane Corso studs across the United States. Apollo was a prized stud because of his overall health, well-defined muscle tone, and overall temperament, but he was also an award-winning Cane Corso with the trademark blue brindle coloring that these dogs are known for having.

Cane Corsos are well-known for their docile, even temperament and make excellent family pets and loyal companions because of it. Apollo was the epitome of these attributes, with a highly stable temperament and overall calm demeanor. He was impressively intelligent, which is not uncommon for Cane Corsos, but Apollo had such a wonderful personality that he was loved by many.

Just one look at Apollo’s pictures is all it takes to see why Apollo was one of the most highly sought after Cane Corso studs. Apollo had a strong body with well-defined muscle tone across his shoulders and legs. His large bones gave him an intimidating stance, and at just four years old, this Cane Corso stud weighed an impressive 142 pounds. For the Cane Corso Italiano breed, the head is the mantelpiece, and Apollo had a superbly shaped head with the telltale prominent cheekbones, broad skull, and high-standing ears.

With all of his enormous power and majestic strength, Apollo’s movements were still truly graceful, gliding through the air with each stride seemingly effortlessly. This Cane Corso had strong hips, elbows, and a healthy heart.

GCh. Apollo was one of the first five Cane Corsos invited to The Westminster Kennel Club Dog Show, and he was only the second Cane Corso dog to earn the esteemed AKC Championship title. He was:

1. A recognized champion with several Best In Shows to his credit

2. The Top Male of seven of eight of the 2007 ARBA Tournament of Champions over 28 other Cane Corso dogs

Apollo has been used for stud by several other breeders outside of Red Rock Canyon Cane Corso because he was such an excellent example of the breed. To date, this Cane Corso stud has produced numerous breed champions, and that number will continue to grow. Even though Apollo passed away March 8, 2016, we still have his frozen semen available for insemination for interested breeders with an approved female. Reach out to us at Red Rock Canyon Cane Corso for more information about Apollo and our other Cane Corso studs. 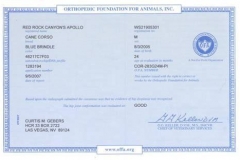 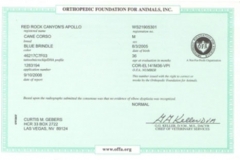 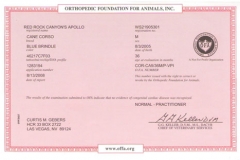 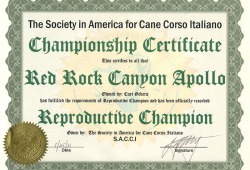